Our climate is warming at an alarming and unprecedented rate and we do have urgent duty to respond. ….We call for the highest political commitment to combat climate change, as a matter of urgent priority.

Marrakesh Action Proclamation, read by Salaheddine Mezouar, Morocco’s foreign minister and president of the 22nd session of the Conference of the Parties to the United Nations Framework Convention on Climate Change on 17 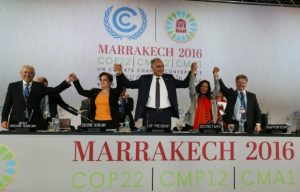 As like Paris Agreement, the `Marrakesh Action Proclamation for our climate and sustainable development’ is also  nonbinding proclamation which also reaffirms nations’ commitment to the Paris Agreement on climate change, and to financing goals for addressing various aspects of climate change, and hails the Marrakesh COP as “an important inflection point in our commitment to bring together the whole international community to tackle one of the greatest challenges of our time.”

However, that’s about all it does, and civil society representatives at the COP noticed. “The ‘Marrakech Action Proclamation’ is a reaffirmation of the Paris Agreement, but it won’t be the sole outcome of these negotiations,” Tracy Carty, Oxfam’s climate policy lead at the conference, said in a prepared statement. “We welcome the ‘Proclamation,’ but urge leaders to show real progress before the conference’s end.”

The document, which is all of one page long, has been in discussions since before the conference actually started on Nov. 7, pushed heavily by the COP presidency. The conference ends today.

The proclamation praises the early entry into force of the Paris Agreement, the first global climate deal to apply to developed and developing nations, and calls for its speedy implementation: “Our task now is to rapidly build on that momentum, together, moving forward purposefully to reduce greenhouse gas emissions and to foster adaptation efforts.”

The document features several other “calls,” including for solidarity for the most vulnerable countries, for stronger efforts to eradicate poverty, and for increased financing for climate projects.

The proclamation also reminds nations that the Paris Agreement does not go far enough to keep global temperature rise below the stated goal of 2 degrees Celsius. “We call for urgently raising ambition and strengthening cooperation amongst ourselves to close the gap between current emissions trajectories and the pathway needed to meet the long-term temperature goals of the Paris Agreement,” the document says.

Under the agreement, nations determine their own climate change-fighting commitments and submit them to the UNFCCC. The nationally determined contributions the UNFCCC has received, however, are not stringent enough to meet the “well below” 2-degree goal. For that reason, the accord requires nations to revise and strengthen their commitments every five years.

No comments to show.